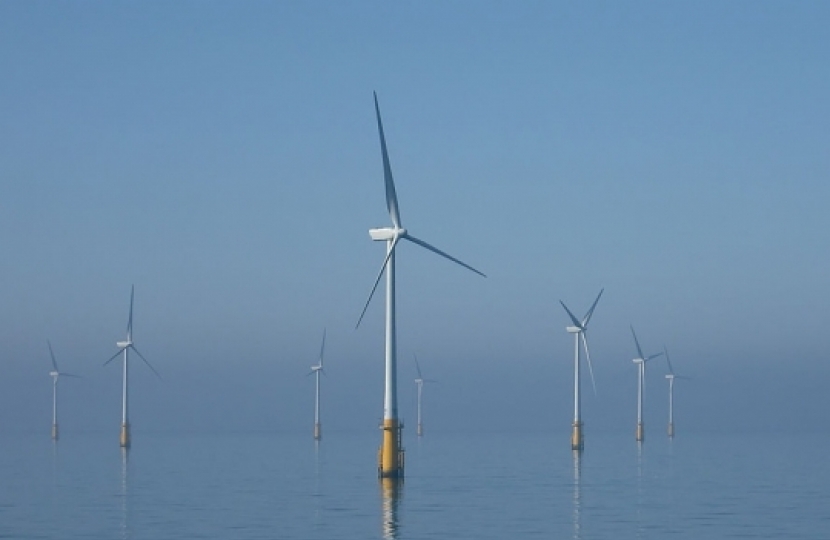 Poole MP Robert Syms together with Dorset MPs Conor Burns, Tobias Ellwood, Christopher Chope and Richard Drax have all made submissions against the controversial Navitus Bay wind farm and have questioned whether the development company’s new Turbine Area Mitigation Option should even be considered without full community consultation.

Navitus Bay Development Ltd (NBDL) plans to construct and operate an offshore wind park in Poole Bay that would be bigger than any other wind farm currently in operation in the world. It would be the first to be proposed adjacent to a vibrant leisure economy, adjoining an outstanding coast of natural beauty and bordering a world heritage site. The wind farm would:

Navitus Bay submitted its Turbine Area Mitigation Option on 5 November 2014 which detailed alternative plans for a scaled down version of the wind farm with fewer turbines. The new option has been examined by the Government's Planning Inspectorate.

In its ruling of 13 January 2015, the Planning Inspectorate states: “On the basis of the information provided by the applicant and other interested parties, … the Examining Authority has decided that the Turbine Area Mitigation Option does amount to a material change but not to the point of constituting a new application. It can therefore be included in the examination as part of the application received by the Planning Inspectorate on behalf of the Secretary of State on 10 April 2014.”

The ruling continues: “To enable affected and interested persons (IPs) to fully engage with the process, the timetable has been modified by extending the deadline by which they can respond to any issues concerning the Turbine Area Mitigation Option.”

The Inspectorate has set a deadline of 5 February for receipt by the Examining Authority of additional representations on the merits of the new option. A further deadline of 5 March is set for receipt of comments on the revised plan, on responses to questions, and on additional representations as to the merits of the new option.

The wind farm is controversial and contentious. Plans for the Navitus Bay development have received almost 2,700 interested representations. This is the highest number for any proposed offshore wind farm the Planning Inspectorate has handled.

Surveys carried out by the developer in 2012 and 2013 show that over one million visitors a year will stop coming to the area, taking with them more than £100 million of income from the local economy.

The Conservative Councillor Group on Poole Council opposes the latest proposals from Navitus Bay: “To see such a major change at this stage of the process is quite staggering and casts grave doubt on the robustness of the founding principles of this project.”

The Group notes that the new scaled-down scheme proposes 105 turbines as opposed to the original 194: “We have yet to see the full details but feel very strongly that the new proposal should be subject to exactly the same review process as the original. We need to restart the planning process from the beginning and not allow this scheme to slip through ‘under the radar’ as a smaller version of the previous scheme. “

An extensive consumer survey in Poole established the local community view. The results demonstrate that a significant majority of the local community are opposed to a major windfarm in any form. A clear majority of residents are concerned over the visual impact and the possible effect on tourism and the marine environment. Less than 30% support renewable wind energy while a majority support other renewable sources including solar and tidal energy.

Major concerns have also been expressed about the cost justification for this scheme and about its sustainability. The proposed wind farm will need massive subsidies and will only have a life of 25 years. The sea bed and immediate area will be affected for hundreds of years. The economic case was based on increasing energy and particularly oil costs. There have been fundamental pricing changes in the world energy market which turn the cost justification on its head.

The area proposed is of outstanding natural beauty and to place an inefficient industrial complex slap bang in the middle of it offends common sense. Poole Conservatives support renewable energy but conclude that “far too many concerns remain unanswered and the questionable benefits are far outweighed by the negatives”.

Bournemouth Borough Council is doing all that it can to oppose the wind farm and has asked the Planning Inspectorate to recommend the Navitus Bay Wind Park application for refusal.

Bournemouth West MP Conor Burns: “Given the material change to the proposal, I find it undemocratic that local people, local businesses and local authorities have been given such limited information on which to base a view, and that only those already registered as interested parties will have the opportunity to comment.”

Poole MP Robert Syms says the mitigation option should go through the full process “without being smuggled in to the process at this late stage”.

Responding to the news that the Culture Secretary will review EDF and Eneco’s Navitus Bay scheme following a warning that it threatens the setting of the Jurassic Coast and its UNESCO World Heritage Site status, the Leader of Bournemouth Borough Council, Councillor John Beesley said:

“EDF and Eneco’s plans to build the highly contentious Navitus Bay wind farm threaten the setting of the Jurassic Coast and its status as a World Heritage Site. Neither Bournemouth, nor the United Kingdom can afford to risk losing this global status for this unique asset; we must do all that we can to protect our outstanding coastline and the tourism economy it supports.  I am delighted that the Culture Secretary has intervened.  I would be surprised if the final conclusion does not mirror the French Government’s action to protect their UNESCO World Heritage site at Mont-Saint-Michel when it was similarly threatened by a wind farm proposal in  2012.”