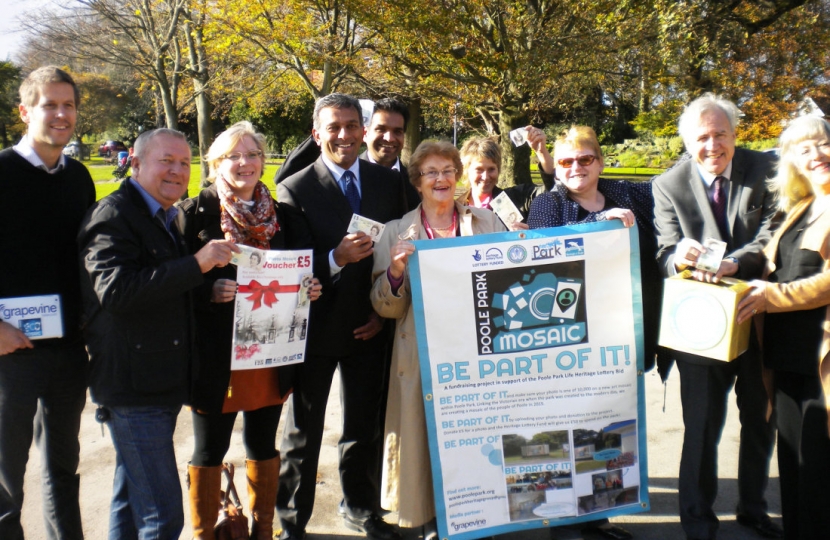 In celebration of the 125th anniversary of Poole Park, local residents are invited to upload a photo of themselves and their families in return for a small donation to the project. The thousands of photos will be collated to form a magnificent mosaic, which when viewed from a distance will depict the original design of the park from 1890. The photomosaic is designed to act as a link between the Victorian era and modern day Poole and its people.

The project gives locals the chance to be part of a permanent legacy to be displayed in the park for years to come. It also raises vital money to help restore the park to its original Victorian characteristics. The mosaic is expected to be impressive, spanning 5 metres in width and nearly 2 metres in height, with a high quality finish expected to last at least 15 years and hopefully a lot longer.

Every £5 donated to the project from every photo upload will help to unlock up to £50 in match funding from the Heritage Lottery Fund. The park received £285,000 of Heritage Lottery fund money to design the proposed park improvements. This fundraising project should take it a step closer to being awarded an overall grant of £2.7 million towards further improving Poole Park.

The Mayor of Poole, Cllr Ann Stribley, said: “It gives me great pleasure to witness all the hard work that has gone into this latest fundraising project. I am delighted to be celebrating the parks 125th anniversary especially as I was also Mayor of Poole during its 100th birthday year.”

Cllr John Rampton, Cabinet member for Parks in Poole, said: “Poole Park is a fantastic facility that literally offers something for everyone. It’s only right that we take every opportunity to look after this local treasure.”

Robert Syms MP added, “The great thing about this project is that everyone can be involved. All you have to do is upload a photo of yourself, your family, your friends or even your pets for £5 and become part of a stunning, creative legacy that will be a landmark in Poole Park for years to come and which also celebrates the 125th birthday of this, our town park.

"Many local businesses have shown their support by becoming sponsors and local groups and charities can continue to apply to upload large numbers of photographs at a much reduced rate. To me this is a win-win project where local people have an opportunity to be part of a stunning, creative legacy whilst raising vital funds needed for restoration.

"Let us show that we value this special open space provided for ourselves and our children as much as the Victorians who built it did and have as much pride in it.”