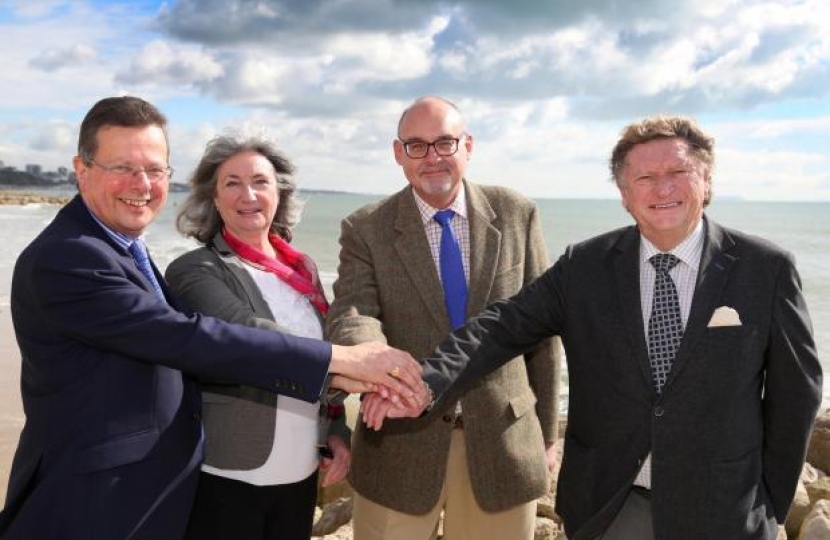 The four Conservative Council leaders for Poole, Bournemouth, Christchurch, and East Dorset have proposed a new council that could be in place by the next round of elections in 2019. If approved it would be the eighth biggest council in the UK.

The bleak financial prospects in the conurbation after reductions in Government grants and rising demands for services, particularly adult social care, mean local politicians must look at radical solutions or face years of making painful cuts.

Councillors expect the numerous benefits to include:

If agreed, the new council would be formed just in time for the 2019 local elections. It would serve a population of almost half a million residents, making it the eighth largest local authority in England, with an annual spending power of more than £1 billion. An initial decision to proceed in principle will be made by spring 2016.

Statements by the four leaders

Councillor Janet Walton, Leader of the Borough of Poole Council: “Councils need to save tens of millions of pounds over the next three years and it is difficult to see how this will be achieved without a fundamental solution. This proposal would provide the prospect of transforming the provision of frontline services though integration, through economies of scales, and through consistency in service quality.”

Councillor John Beesley, Leader of Bournemouth Council: “One council for south east Dorset is a significant opportunity for residents and businesses. We are keen to utilise new devolution powers being created by central government to benefit the economic prosperity and quality of life for residents, to achieve more joint-working on service delivery and management, to drive down costs further and allow us to plan wider than traditional local government boundaries. It is important that we consider all options in detail, and we must get this right. I believe that, given the significant economic concentration in south east Dorset, this geographical combination makes the most sense for local residents.”

Councillor Ray Nottage, Leader of Christchurch Council: “We all agree the principle that, if the new council goes ahead, existing mayoralties should be maintained. There will be a need for a meticulous evaluation of existing civic identities and traditions, seeking to preserve those things that our communities value the most, that help to shape our respective senses of identity. Each community’s interests and views will be sought as we seek to ensure that all residents can identify with and have confidence in any new council that is formed.”

Councillor Ian Monks, Leader of East Dorset District Council: “The shape of local government will inevitably change as a direct result of the ongoing reduction in central government financial support and rising service demands. Failure to change will result in fewer and poorer services to the public and so this is not an option we can afford to ignore.”

The idea of forming a new unitary authority for South East Dorset is just one of several proposals aimed at improving governance in Dorset. Another idea is to form a combined authority for the whole of Dorset to govern transport and development in particular. These schemes are entirely in accordance with Government thinking. For all such reorganisations, Government ministers foresee an extensive process of review and consultation before any new authority is established, as the following citations from House of Commons briefing papers indicate.

"During 2014, some discussion took place about the possibility of further local government reorganisation – creating further unitary authorities in areas which currently have two tiers of local government.

In September 2014 Stephen Williams MP, Parliamentary Under-Secretary at the Department for Communities and Local Government (DCLG), called for reorganisation around ‘cities’ and unitary counties. ... Kris Hopkins MP, also a minister at DCLG, opposed any further reorganisation. He was supported by the then Secretary of State, Eric Pickles."

The Secretary of State must consult the authorities that would be covered by the combined authority, and must be satisfied that the establishment of a combined authority will contribute to economic development and transport policy in the area in question."

A leading local Liberal Democrat Councillor: "I am frankly astounded ... that the four Conservative leaders of the local councils have been meeting behind closed doors with a view to creating a single council covering the conurbation. ... Any combination of councils with Bournemouth in whatever form will inevitably result in the loss of people of Poole determining their own future ... Poole council must give the people of Poole their say in a referendum."

Deplorably for an elected official, the astounded councillor has failed to understand the background to the discussions held by the four Council leaders, who have simply explored the path foreseen in the briefing papers quoted above. No councillor should need to be told that any implementation of the idea for a conurbation would take time and involve extensive public consultation. Councillors need to discuss the proposal to work out its implications before anyone can vote on it.