Big Decision for Parliament in January 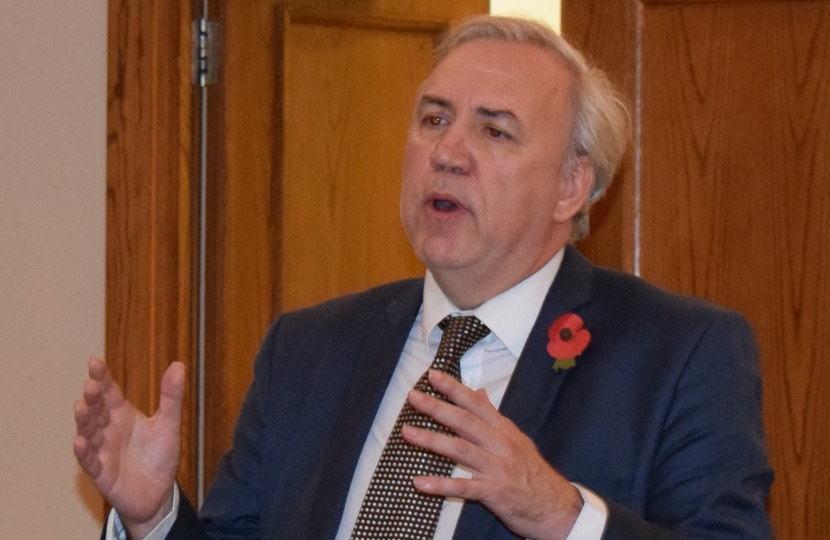 Sir Robert Syms, Member of Parliament for Poole, spoke in the House of Commons debate on the Withdrawal Agreement last Wednesday, saying that with a heavy heart he would be voting against the deal, as he has concerns about the impact of the Northern Ireland backstop, and in particular on the lack of a time limit for its termination:

"This will surprise you, Mr Speaker: I am old enough to have voted in the 1975 referendum, and I voted yes to stay in the common market. But what I voted for then changed rather substantially over the years, and I became somewhat concerned about the way the EU had developed. When it came to the last referendum, I was for leave—on balance, but I think that was the right decision. The truth of the matter is that it was not to do with what was on the side of a bus, but that most of our citizens have had to live with the EU over several decades. There was just that general feeling that the EU was not very responsive to their needs. The British people have a certain native common sense that tells us that we could do better on our own. Compared with the 1970s, when Britain was a rather depressing place, Britain is doing really well in the world, and it has been doing over the past 20 years. The reality is that it was a vote of confidence in this country from the British people. We can do a lot better. We can be an open, flexible, dynamic economy in the world.

"Leaving the EU was always going to be a messy business, because any kind of divorce is, and there are compromises to be made. I pay credit to the Prime Minister for the work that she and the negotiators have ​done. It is a difficult job and probably a thankless one, and it will be even more thankless next Tuesday when we get the House’s decision. There are some good things in the agreement and I could agree with a lot of it as a compromise to see us out of the EU, but as a Conservative Unionist, I find the Irish backstop very difficult to deal with.

"I do not want to treat any area of the United Kingdom differently from my own constituency. There is a danger of our getting hung up in that arrangement. The advice of the Attorney General is very clear. The Prime Minister needs to go back to the EU and say, “Deal on providing that we have a date to the backstop.” If there is a date, many people’s fears about our getting hung up in the arrangement and not being able to do deals would disappear. We have already heard that there is no intent either north or south of the border to establish a hard border. My fear is that the backstop will be used as a device during the negotiations over trade and over fish—as President Macron has already said—to screw the British down and give us a bad deal.

"It would not be my favourite choice, but it may well be a choice that the House will have to consider depending on how we end up next year.

"The reality is that I hope we can finesse the current agreement. Ultimately, the EU must accept that the backstop is unacceptable to Parliament. If it accepts that, there is a fairly good chance that the deal will go through. The deal, without the backstop, might be rather better than the EFTA proposals. We will have to see how the Prime Minister does. When there has been to-ing and fro-ing between member Governments of the EU, referendums and agreements, it is not unheard of for Governments to go back to the EU and say, “Our people will not wear it, think again.” It would take only some very modest changes to get the deal done. I hope that the Prime Minister listens to what the House says next Tuesday. I am afraid that I will be voting against the deal in its current form, but I will be receptive to modification of the backstop and then I hope that we will be in a position in which we can move on.

"I am unhappy about voting against my Government. I have been a Member of Parliament for more than 20 years. Since coming into government in 2010, I have voted against the Government only once. This will be the second time. I hope that I never have to do it again because I believe that politics is a team game and I want my team to win and I want the Prime Minister to do the best for our nation. Unfortunately, though, I am a Conservative and Unionist and the backstop is something that I cannot accept."

Many MPs including Sir Robert would like the Government to go back to the EU to tweak the deal. At the moment it looks as though it will go down to defeat unless the Government amends its proposals.

Sir Robert has also been serving in the last few weeks on the Finance Bill. This deals with the detail of the last budget and gives our Poole MP an opportunity to have an input on many of the tax changes which the Chancellor Philip Hammond announced.

Sir Robert continues to visit local businesses and concerns and has discussed with many local enterprises what are the positives and negatives of Brexit. If any local businesses would like Sir Robert to visit them, please contact his office at 38 Sandbanks Road, Poole BH14 8BX, telephone 01202 739922.

"Two days into the great Brexit debate, a Tory MP called Sir Robert Syms rose to his feet to address the House of Commons. Syms is not especially well known outside his constituency of Poole in Dorset and in normal times stays loyal. But at 6.40 pm on Wednesday, ..."

Our Plan for a Stronger Economy

Read about how our plan is tackling inflation and helping you with the cost of living.